The groups, over the weekend, remniscenced on the “horrific murder and the Kangaroo judicial hanging of the Nigerian state of its forefathers and heroes” at the 24th anniversary of the action in St. Louis, Missouri, USA.

The occasion was reportedly honored by a cross spectrum of human rights communities, supporters and friends of Ogonis struggle, who paid tributes to their “untarnished character, courage and conviction” and vowed to take the fight to restore their good names and dignity as well as ensure that their names are removed from the Nigerian criminal records.

Glenn Roger, a retired police chief was said to be the keynote speaker at the event.

The statement, which was released to the media, was dated 16th November, 2019.

Roger was quoted to have declared at the event that the Movement For the Survival of Ogoni People (MOSOP), is the hope and legacy of the Ogoni people battling against majority supremacy and “corporate and colonial theft in Africa.”

The groups therefore called on President Muhammadu Buhari, Senate and lawmakers of Nigeria “to exonerate and immortalize our fallen heroes from the indignity of crime they never committed and death they never deserved, and expel Shell from the shoreline of Ogoni, so we could dialogue on oil resumption in Ogoniland to protect Ogoni/Nigeria national and economic security from foreign influence and encroachment.”

They noted that this should be done now that the after fact evidence from Aso Rock and Shell had exposed the “government scandal that the late dictator Sani Abacha invited the former CEO of the Royal Dutch Shell, Brain Anderson to Aso Rock to endorse, cosign and encourage the ploy that led to the killing of four Ogoni prominent chiefs three weeks before the incident that led to the trump up charges on which Ken Saro Wiwa and eight Ogoni activists were hanged.

“Also, this should be done now that Major Paul Okontomo, the military commander of the Rivers State Task force has voluntarily confessed that Ken Saro- Wiwa never killed anyone.

“We are equally calling on President Muhammadu Buhari to arrest Paul Okontomo, the then military commander who boasted that he knew or had 310 ways of killing Ogonis as well as prosecute the Royal Dutch Shell for providing financial and materials assistance to military personnel to kill innocent people.

“Paul Okontomo’s led ‘wipedout’ campaign and the Royal Dutch Shell significantly contributed to the genocide in Ogoniland, where more than 30,000.00 people were killed.

“Many others were raped, tortured, arrested and detained, while over sixteen towns and villages were burnt.

“The ecological war waged on Ogoni people by the Royal Dutch Shell and HYPREP, and the ongoing environmental fraud are also not an isolation.

“These are part of what we call criminal enterprise to spread terror and poison among and within Ogoniland without Ogoni oversight, and to drive Ogoni into extinction,” the groups said in the statement.

The groups added in the statement that as much as they had high respect for the UNEP REPORTS and UNEP representative, Mr. Mike Cowing sitting on HYPREP BOTS as TRUSTEE, on “a TRUST that has no reflection to Nigerian budget,” they believed that private investors were being used “as tools of affiliation to predatory companies.”

They said further that they believe that there is nothing different going on in Ogoni “or the camouflage cleanup, that will benefit Ogoni people.

“You cannot commit a crime in a place and when caught, you not only lead the solving of the crime, but oversee the entire process too.

“Mr. Mike Cowing a native of Romfort, United Kingdom, has failed in his duty as a UNEP’s technical team on HYPREP.”

The groups therefore viewed UNEP or UNEP representative on HYPREP as a media public relations and political gimmick.

“As such, we can no longer ignore UNEP or Mr. Cowing blazingly dishonesty, conflict of interests twisting hands retail politic with predatory unprofessional companies, protecting Shell’s deep pockets, and crumpling Ogoni livelihoods, historical heritage, lives and ecosystem and recycling poison in the area.

“The notion that HYPREP is supervising the cleaning according to Nigerian law is not just disingenuous but a fraudulent scheme in that, when Shell was stealing Ogoni oil there was also Nigerian law not to steal yet shell stole our oil for decades.

“In the same vein, there was a Nigerian law not to kill but Shell and Nigeria cohorts in killing our heroes.

“As far as we can remember, a country’s law protects and provides for its citizens to be law abiding. Law and the rule of law isn’t synonymous with injustice but equity and fairmindedness. We want to know the part of Nigeria law that empower HYPREP to deviate from an international recommendations,” they said in the statement.

They therefore demanded the FG to disband HYPREP and contract an international company “with capable professional and technical expertise to supervise, monitor and handle the cleaning effectively, with a firm adherence to all of the basic recommendations in UNEP report.

“We also call on the United Nations, WHO, UNICEF and other international organizations to impress on Joyce Msuya to investigate the non-implementation of UNEP REPORT basic requirements and withdraw Mr. Mike Cowing from Ogoni for impropriety and appearance of impropriety,” the statement read. 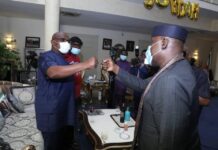