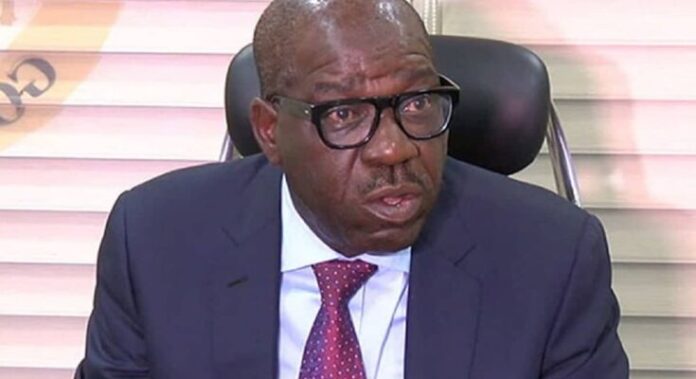 The Edo State Governor, Godwin Obaseki, was on Tuesday cleared by the authorities of the University of Ibadan of alleged forgery of his degree certificate brought against him by the All Progressives Congress.

But hearing in the matter continues today (Wednesday) at a Federal High Court in Abuja.
The degree certificate was confirmed to have been issued to Obaseki by the institution in 1979 after his formal graduation.
The Deputy Chief Registrar, Legal Affairs, UI, Abayomi Ajayi, who testified on subpoena, told Justice Ahmed Mohammed that the governor graduated from the university.
Relevant pages of UI calendar for 1976, admission brochure for degrees, award of diplomas and certificates and Obaseki’s application for admission and another one for collection of his certificate from the university were tendered by the witness and admitted as exhibits by the court.
The witness maintained that from the records of the university, Obaseki was admitted as student in 1976 through direct entry and graduated in 1979.
Under cross examination by counsel for the APC, Chief Akin Olujimi (SAN), the witness said, “I will not regard the photocopy of the original certificate as forged, but incomplete photocopy, because the certificate of the University of Ibadan is larger than the paper upon which the photocopy was made.”
Earlier in his evidence, Charity Aiguobarueghian, an unofficial advisor to Obaseki, had admitted making the disputed photocopy of the original degree certificate for his principal.
All the certificates, which are original copies, were admitted as exhibits by Justice Mohammed.
Meanwhile, ThankGod Iduresi, the younger brother of the South-South Zonal Youth Leader of the All Progressives Congress, Gabriel Iduseri, was on Tuesday shot by gunmen in Benin, who also made away with his car.
Gabriel, a witness in the certificate forgery case instituted against Obaseki, gave his testimony on Monday at the Federal High Court in Abuja.
It is not clear if there is any link between his involvement in the case and the attack on his brother.
sharing is Caring... Please Share

S’Arabia To Allow Conditional Entry ‘From All Countries’ Despite Omicron