Ogun State Governor, Prince Dapo Abiodun has assured  all residents of the state that his administration will continue to deepen legacies inherited from past leaders.

He called on youths and other residents of the State to join hands with his government by contributing to the development agenda of the state.
The governor made the call on Wednesday in a State wide broadcast to flag off the 45th anniversary of the creation of the state.
It would be recalled that on the 3rd of February, 1976, the then Military Head of State, Late General Muritala Ramat Muhammed announced the creation of the state alongside other six states.
He said, “We must also appreciate that there can be no development in an atmosphere of insecurity. We must learn to manage our diversity and turn it into our strength”
He reaffirmed his administration’s decision to be fair, just, inclusive, equitable and adherence to the rule of law, in its approach to governance has its origin in the wisdom and vision of the founding fathers.
Abiodun noted that “with humble beginning in 1976, Ogun had grown to become one of the viable states in Nigeria, grown its IGR to become the first among its contemporaries and emerging as the fastest growing investment and commercial destination both within and without Nigeria”.
While commending the efforts and sacrifices made by the founding fathers and past military and civilian governors of the state, the governor said Ogun has continued to tower above her contemporaries in all human endeavours as a result of the valid foundation laid by the heroes.
According to Abiodun, past leaders and heroes of the state gave their yesterday to give the people of the state today they are proud of.
He added that indigenes of Ogun have made and continue to make their marks in different fields such as medicine, social science sports, law, engineering, politics, arts, journalism, public service, emphasising his administration will continue to build on the strong footings of the founding fathers and past leaders.
The governor, however, urged the youths to drink from the fountain of knowledge and wisdom as well as draw inspiration from promoters of new Ogun who are still alive, by working harder and more assiduously, in building a state desired by the Ogun people and that the coming generation will be proud of.
He pointed out that the state would have rolled drums to celebrate the milestone, but the need to adhere to strictly to the prevention protocols against COVID- 19 pandemic, has made the government to opt for low-key celebration.
“My dear people of Ogun State, 45 years is no mean achievement in the historical development of any state: whether a sub-nationality or a nation. We should have rolled the drums in celebration, but, we will not do that. This is not because of want of what to celebrate, but because of the need to adhere strictly to the prevention protocols against the COVID-19 pandemic. This celebration will be decidedly low-key”.
“With humble beginning in 1976, our dear state has grown to become one of the most viable states in Nigeria. We have grown our internally generated revenue to become the first among states created at the same time with us. We are the fastest growing investment and commercial destination not only in Nigeria, but in the entire West African sub-region, attracting one of the highest Foreign Direct Investment (FDI) and local investments”.
“We are the leading state in the production of limestone, granite, glass sand. This is corroborated by the records of the Nigerian Bureau of Statistics in its 2019 report which states that capital importation into Nigeria amounted to $5.3b, and Ogun state ranked 3rd only behind Lagos -Africa’s 5th largest economy – and Abuja – the nation’s capital – in the destination of these investments”.
“With only one university in 1982; then Ogun State University, now Olabisi Onabanjo University (OOU), Ago Iwoye, having over 500 students, we have grown to become the education capital of Nigeria with 26 tertiary institutions. OOU alone now has over 50,000 students, offering graduate and post graduate courses in different fields of human endeavours”.
“My dear people of Ogun State, one cannot have this kind of inheritance and lay it to waste. As an administration, we will not content ourselves as proud inheritors of these worthy legacies. The inheritance also imposes a responsibility to create a better future that coming generations will be proud to inherit”, Abiodun stated.
The governor, however, said that the decision by his government to “push the frontiers”, informed its unwavering commitment to the continued and successful implementation of ISEYA mantra as the vehicle for the ‘Building our Future Together Agenda’.
This, according to him, is in tandem with the supreme goal of the founding fathers of Ogun State.
He, therefore, used the occasion of the Ogun 45th anniversary to appeal to Nigerians, to eschew all forms of violence and learn to live together in peace, saying “we must appreciate that there can be no development in an atmosphere of insecurity.
“We must learn to manage our diversity and turn it into our strength. There can never be a better lesson in the management of diversity as a source of strength than from us in Ogun State. With over 10 sub-ethnic groups, this diversity has been a major forces propelling the development of our dear state”, Abiodun noted.
He restated the commitment of his administration to continue to deploy resources towards ensuring conducive environment for the people, to discover and nurture their potentials, irrespective of age, gender, status and location.
While saying that no government can claim to possess all the funds and wherewithal of development, Abiodun call for more support, cooperation, collaboration and prayers from the people towards the continued development of Ogun state.
He also enjoined the residents of the state to continue to adhere strictly to the guidelines and protocols in the right against COVID-19 all the time.
sharing is Caring... Please Share

It’s Too Early To Tip Nigeria For Title – Amunike 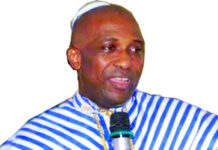