how do i get suboxone without insurance ciprofloxacin strep throat what can i take for a uti over the counter generic tamiflu discount card
24.2 C
Lagos
Tuesday, September 21, 2021

Imo State Governor Rochas Okorocha has told the Igbo to vote President Muhammadu Buhari on Saturday or lose the chances of clinching the Presidency in 2023.

He insists anything short of reelecting Buhari will mean that Ndigbo will have to wait until 2031 to take a shot at the Presidency.

“I was called all sorts of derogatory names. Some said I was going to Islamise the whole Igbo. Is Igboland Islamised today?

“Igbo today are playing politics with the mindset of a trader, thinking only of the immediate benefits unlike other tribes that are playing real politics.

“My people listen to me and listen real good, whatever I tell you to do, do it as it will profit us. I am telling you today that Buhari will win.

“On Saturday, if Igbo supports Buhari and Buhari wins, in 2023 Ndigbo will have the right to demand for Igbo Presidency.

“Those who love Igbo nation must vote for President Buhari because if we miss this chance we may not get the presidency even by 2023 or 2027 or 2031.

“The time is right for the Igbo nation to play the right politics so as to have a clear chance by 2023”.

The governor, who spoke while addressing crowd at zonal rallies in Okigwe zand Owerri zones respectively, to mobilise votes for the President, regretted “some Igbo politicians are campaigning to deceive the Igbo again as they did in 2015”.

He added such external forces are positioning men like Senator Hope Uzodinma against the Igbo interest.

According to him: “Some people especially our brothers are campaigning now against President Buhari saying he is Boko Haram that he is a herdsman and so on.

“You can remember in 2015, I was telling the Igbos to cast their vote for Buhari because he will win with or without the votes of the Igbo.

Why Fela’s Statue is Without Head -Yeni Kuti 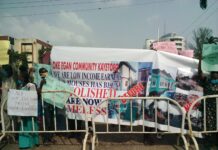