Arole Oduduwa & Ooni of Ife, Ooni Adeyeye Enitan Ogunwusi, II has comiserated with Nigerians, family and fans of the late former Secretary General of Nigeria Football Federation(NFF) Chief Taiwo Ogunjobi, describing his death as not just a big loss to Nigeria, but also a ruthless blow to the Yorubaland and the State of Osun where he served as FA chairman till he died.

Ooni Ogunwusi said this on Wednesday at the playing ground of

Oduduwa College, Ile-Ife during the final match of the maiden edition of Ojaja II Principal Cup where he, in a sober reflection, led the crowd to observe a minute silence in honour of the late sports icon, saying Ogunjobi was a football pillar who he had earlier chosen alongside former coach of Super Eagles, Chief Festus Onigbinde to be in charge of the proposed Oodua Soccer Academy aimed at discovering future soccer legends using a catch-them-young approach.

Also during the event, the Ooni who is the Co-chair of National Council of Traditional Rulers of Nigeria flagged off the Ojaja II football Academy, which he said will boost the country’s fortune in football and create career opportunities for the younger generations.

The foremost African monarch added that football remains a viable sport that manages the restiveness of the youths and unites the entire nation.

He praised the organizers of the tournament for the initiative, and lauded the people of Ifeland for their large turnout and calm conduct throughout the competition. He also assured that the competition will be extended to all states across the south west geopolitical zone, and Nigeria at large.

The highly revered king had earlier, to the admiration of thousands of football fans, kicked the ball which commenced the final match of the tournament between Oduduwa College, Ile Ife and Olode High School, Olode-Ife in Ife South Local Government area of the State of Osun.

The score line was opened by the goalkeeper of Oduduwa college, Olasunkanmi Iyiola through a free kick to give the home side an early lead after 12 minutes into the game, this was followed by Fidelis David who fired from a close range to equalize for Olode High School ending the first half in a 1 – 1 draw.

In the second half, Ojetayo Gbolahan scored to give Olode the lead before Edun Olamide of Oduduwa college responded with a penalty kick which made it 2 – 2 draw.

An extra time of 20 minutes was declared to know the winner, where Oduduwa College emerged victorious with two separate goals from Oni Timileyin and Adebiyi Femi respectively to end the match with 4 – 2 in favour of Oduduwa college.

In his opening remarks, the project director, Mr. Akinola Ayo-Martins expressed that the grassroot football is important and this particular initiative by His Majesty has come to stay in Nigeria with Kabiyesi’s keen interest in youth empowerment. He said the tournament has produced a lot of football talents that will be mentored towards breakthrough in their chosen career.

Dignitaries at the event included Hon. Lanre Moyero, who is a FIFA licensed football agent and the CEO, Moyero Football Academy, Russia, Asiwaju Akintunde Ayeni (YEMKEM), among other prominent personalities. 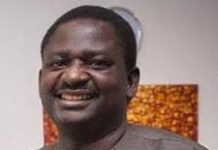