–Tinubu & Makinde
Actor turned politician, Hon. Rotimi Makinde seems to be much concerned about the political situation in his state, Osun which according to him may jeorpadize APC chances of winning the state in the coming governorship election and other sundry issues affecting the party. He however writes an open letter to a chieftain of the party; Asiwaju Bola Ahmed Tinubu. Enjoy;
“It is the fear of what tomorrow may bring that makes the tortoise carry his house along with him wherever he goes.”
Dear Sir,
With the greatest compliment and humility, I humbly write from Ile Ife, Osun State as a one term house of Representatives member of the 7th Assembly.

Although, we have met severally at political settings but I am not very sure if you will recognize me very well. I have attended couple of meetings with you and discussed with you on phone times without number yet I doubt if you can vividly remember my face.
Besides, I think I do not need to state here my love and the greatest respect I have for your leadership and person. I would rather love to simply restate my commitment to the party APC by emphasizing the fact that I am a die hard lieutenant of Ogbeni Rauf Aregbesola the amiable and highly respected governor of my dear Osun state. Through my regards for him and the honour I have gotten from him, I believe you as a grand commander can honestly understand how I hold you in high esteem.

Directly and indirectly, I have benefited from your kingdom, enjoyed your generosity and without exaggeration your wise counsel.
Let me not bother you for too long on my introduction or moves to impress you with the demonstration of my loyalty so that I would not be wrongly accused of bootlicking.
Ordinarily, I am supposed to see my mentor and the very man who commisioned me into politics as the bridge to communicate with you as my grand leader to maintain normalcy in protocol and as a mark of respect. I therefore wish to be quick in pleading for forgiveness from both of you to accept this as my fervent desire to fulfill my principle and call to service.

I hold you and my direct boss in high esteem but yet even as one of your political pupils who believe in your pedagogical imagination, I feel I owe you the duty to ensure your ears are well fed and to serve as reflective glasses to aid your eyes the more.
Political season is here again,it comes and goes, but the fight for quality governance and to sustain it  has never waned because oppression is relentless.

We must not only work harder, we must fight smarter.We went into Osun West bye election as a divided party,we shot ourselves in the leg and we have since regretted our action as we are the type that prolonged our malice to election day. Our national party and leadership also care not, today we appear united but I doubt this with all sincerity for our National body and I guess our leaders remain undaunted or waiting to make mockery of our style of politics.Let no one sadistically await our defeat, our failure undoubtedly would be the beginning of the national disaster for Apc government.
To fail to plan along with us  is worst than to plan to fail.

We appear to be planning to fail.

As earlier stated, osun state is my target, All Progressives Congress (APC) is my focus. I pray no one will misinterprete me while stating my facts. In the absence of sentiment,We stand well and have enough to sell our party only if our leaders overlook grievances and think of us as people.Our party is not faring well at both the national and state levels. I would not want to bother you with the story of Osun west bye election or the sad experience of the party serial attacks sponsored within and by disgruntled elements reigning supreme at this moment only because our president belongs to all, I am so sure you must have been well briefed by Ogbeni and other leaders of our great party on why we lost woefully in the bye election.

My concern is that I refuse to believe that we have really learnt anything about the outcome. These are among my fear, Ekiti election is coming ahead of us, if we take Ekiti election for granted and God forbid we loose out to the Opposition, it may further give these clever enemies the needed tonic to fight hard in Osun State, and already they are counting on our enemies within. Without entertaining knavery exaggeration, osun by now is enjoying tremendous transformation under the administration of Ogbeni Rauf Aregbesola and I think we all need it as a point of duty to ensure we sustain that tempo. The heedlessness of the All Progressives Congress at the National Level makes me feel heart broken. So many things including federal appointments keeps dividing us further as a party in Osun state.

Firstly, the appointment of the minister caused silent malice, I am not very sure if the governor would be comfortable with a minister coming  from his very home town if consulted. The Ogbeni I know would rather wish to balance the appointment with a nomination from another zone.This and many more are what we witnessed from other meagre opportunities that came to the state. Governorship election is fast approaching, how best do we convince our teeming supporters that we are well connected to the Federal. Let me not hesitate to even inform you that I can see it coming that we as a people would not even be allowed to make our choice of candidacy on who succeeds Ogbeni Rauf Aregbesola. I am not a prophet of doom but a mere realist.

This is the time for me to alert you and our leaders earlier..

Let no one plan to accuse the like of me as dummy lieutenant or regard this open letter as hogwash, this is my state and this is about my future and keeping silent is at variance to my call and principles. Osun is shaking, Aregbesola is doing his best, the national party does not behave as a party with serious intention to win future elections.

Let me stop here for a while.

With the greatest honor and respect.

*I am forever yours, Rotimi Makinde* 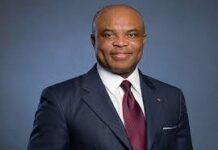