Not less than 6,806 Nigerians have voluntarily returned from Libya between January 6 and December 29.

The National Emergency Management Agency (NEMA) earlier said a total of 6,672 Nigerians voluntarily returned from Libya from January 6 to December 28.

However, this number increased when another set of 134 Nigerians from Libya arrived Murtala Muhammad International Airport (MMIA) on December 29 at 10:20 p.m.

The flight BURQA Airlines Boeing 737-800 with 5A-DMG arrived the Cargo Wing of the MMIA with 10 adult females, 123 adult males and 1 infant including a medical case.

The project of the repatriation of these Nigerians from Libya is the programme of International Organisation for Migration (IOM) with the funding for reintegration at the local provided by the European Union (EU).

The returnees were received by officials of the National Emergency Management Agency (NEMA), Nigerian Immigration Service (NIS), the National Agency for the Prohibition of Trafficking in Persons (NAPTIP), Federal Airports Authority of Nigeria (FAAN) and the Police on Friday night. 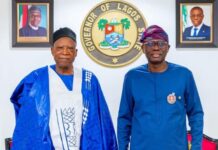 Primate Ayodele Empowers Journalists With Over N5 Million During Launch Of...