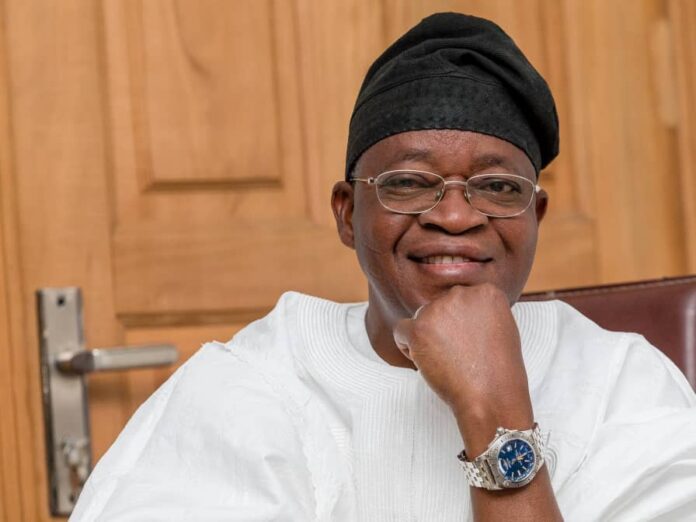 Governor Gboyega Oyetola of Osun on Thursday inaugurated a N3.1 billion flyover construction at the popular Olaiya junction in Osogbo.
Oyetola, during the inauguration, said the project was in swift response to the need to secure the future population explosion of the state capital.
He identified meeting traffic needs, eradicating needless auto crash and enhancing the quality of lives of the people, through timely and prompt infrastructural development, as other reasons behind the construction.
The governor said the project would be funded through the Alternative Project Funding Approach (APFA).
According to him, APFA entails that the contractor will fund the project, while the state repays the contractor over a period of time.
This, he said, would enable the government to free up resources for other important obligations.
“Indeed, the adoption of Alternative Project Funding Approach is another leg in our model of creative funding of projects in a depressed economy and an assurance that we shall always keep our pact with our people.
“The Olaiya flyover project is in response to the need to enhance the quality of lives of our people and improve the infrastructure our city, which in recent years is becoming more populated and boisterous on account of increasing business activities.
“The implication of this is the growing traffic around major routes in the state and specifically, the Olaiya axis, leading to waste of man hours by residents in our state.
“Sadly too, there had been countless cases of accidents of commuters. I have personally witnessed few of these unfortunate incidents.
“We cannot afford to waste more lives,” the governor said.
In his remarks, Mr Remi Omowaye, Commissioner for Works and Transport, reiterated that the flyover was conceptualised as part of efforts to reduce traffic, lessen accident rate and advance the infrastructure development in the state.
He said the project would as well go a long way to complement some of the new roads approved for construction and rehabilitation by the Oyetola-led administration.
Meanwhile, Mr Abel Adeleke, the Chairman/CEO Peculiar Ultimate Concerns Limited, the company to construct the flyover, assured the government and residents of quality and standard service that would stand the test of time.
Adeleke, who promised to bring his repository of experience in civil engineering to bear on the construction of the flyover, pledged that the project would be delivered within the stipulated record time.
According to him, the flyover, which is about 295.95 metre length, will be completed within nine months.
Earlier, the Speaker, Osun House of Assembly, Hon. Timothy Owoeye, lauded the governor for giving Osun, particularly Osogbo, a facelift of socioeconomic and infrastructural development.
The Ataoja of Osogbo, Oba Jimoh Olanipekun, also applauded Oyetola for taking the welfare and well-being of the people as priority
The Oba also commended the government for deeming it fit to build the flyover as part of efforts to complement the existing road infrastructure.
sharing is Caring... Please Share