It still sound and seem unbelievable to some people how Adenike Khadijat Oluboyo, daughter of the immediate past Deputy Governor of Ondo State, Alhaji Oluboyo was found under the bed of her boyfriend Adeyemi Alao after six days in Akure. 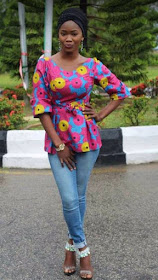 The lady was allegedly used for money rituals by her Abuja based boyfriend Adeyemi Alao popularly called QS.
Seven days before the incident, Khadijat an undergraduate of Adekunle Ajasin University, Akungba Akoko, left her school to see her boyfriend in Akure, but was allegedly killed by him for money rituals and her corpse was kept under his bed for six days as instructed by a native doctor. But on the sixth day, luck ran out for Alao as her body was discovered by Alao’s younger brother, who reported the case to the police in Akure.The Ondo State Police Public Relations Officer, (PPRO) Mr Femi Joseph, disclosed that the dead body of the undergraduate was truly found at a house at Oke-Aro area of Akure following a tip-off and some arrests have been made. Although the main suspect, Adeyemi Alao is still at large.
The police also stated that investigation into the matter has commenced and after investigation, the general public will be briefed on the incident.
sharing is Caring... Please Share