Peoples Democratic Party (PDP) has condemned the Hate Speech Prohibition Bill currently receiving attention at the Nigerian Senate and described it as savage, repressive, cruel and murderous especially its prescription of death penalty.

This was contained in a statement released on Wednesday by the spokesman of the PDP, Mr Kola Ologbondiyan.

He said: “Much as the PDP does not condone hate speech under any guise, our party rejects the bill as unconstitutional, undemocratic and a barbarous design targeted at official extermination of voice of dissent and perceived opponents of the All Progressives Congress (APC)-led Federal Government.

“The PDP notes that the nation already has enough constitutional provisions and extant laws to safeguard a sane and healthy public expression space and cannot allow such cruel law devised to victimise and persecute the citizens, ostensibly as a regime protection measure.

“Such laws can only find space in Hitler’s Germany, Mussolini’s Italy, Idi Amin’s Uganda and not in this era or in a democratic state such as Nigeria.

“The resurfacing of the bill in the Senate, after Nigerians had vehemently rejected it last year, only points to the incurable desperation of the APC Federal Government to suppress and crush the will of the citizens at all cost.

“The provisions of the bill are deliberately hazy and nebulous with the malicious intention to victimise innocent Nigerians.

“Such obnoxious laws are characteristics of known anti-democratic regimes, as prelude to their suspension or abolition of constitutional provisions to set the stage for totalitarianism.

“Our party holds that, if allowed to pass, the hate speech ‘prohibition’ bill, with its savage provisions, would destroy our democratic order, strip our constitutional provisions, the rights of citizens and usher in a full-blown despotism in Nigeria”, the party added.

PDP challenged proponents of the bill to start by condemning and setting penalties for those behind the ‘body bag’ comments as well as the ‘baboon and the dog blood’ narrative, which led to bloody unrest and the death of many innocent Nigerians.

World War III: What China Told Iran About US On Saturday 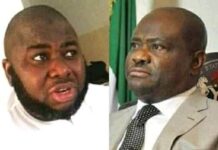