As the news is spreading so widely, the Peoples Democratic Party, PDP, has reacted to an emerging report that some of its Governors from the South East, South South and North East geo political regions were working for the All Progressives Congress, APC, to ensure President Muhammadu Buhar’s reelection in 2019.
The PDP described the claim as “self-delusion” on the part of the ruling party, adding that Nigerians were already tired of the APC and its presidential candidate, President Buhari.
The PDP governors were said to have been meeting secretly with key government officials and the leadership of the APC to plot strategies on how to deliver huge votes to the president in the 2019 general elections.
The PDP governors from the South-East and South-South are said to be particularly unhappy with the choice of Peter Obi, former governor of Anambra State, as running mate to Atiku for the 2019 presidential election.
However, National Publicity Secretary of PDP, Kola Ologbodiyan, told New Telegr that the insinuations by APC that some opposition governors were working for Buhari was an exercise in “self-delusion.”
He added, “APC and President Buhari are in self-delusion.
“Even all Nigerians are sick and tired of President Buhari and APC.
“Not a single PDP governor is campaigning for Buhari. It is just a rumour and it will remain as that.”
sharing is Caring... Please Share 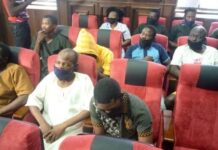 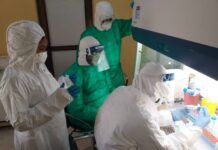