The attempt by a suspected kidnap squad to abduct a Deputy Comptroller of Customs, her younger brother, who is a lawyer and her son yesterday in Ajah was foiled by the police.

The Area D Commander in Mushin, acting on the directive of the Commissioner of Police, Imohimi Edgal, assembled a decoy team which played along with the suspected kidnapper, Yomi Odudare, who has been calling Yisa Theophilus, the lawyer.

The police team ran a quick check on the caller based on available information and came to conclusion that he was up to something sinister.

The team found out that aside being a notorious criminal in the area, the caller, later discovered to be into land selling business (Omonile).

Gathered that the detectives called him to meet with them for a land deal and he agreed.

A statement by the Lagos State Police Command’s spokesman, Chike Oti, a Chief Superintendent (CSP), said: “Yesterday, (Sunday) being the day they agreed to meet, the detectives went along with Theophilus, whom he had been calling frequently. They met the suspect at a project site in Ajah, Lagos, called Fara-park and he was promptly arrested.

“During a brief interrogation at the scene of arrest, the suspect confessed that he has never met the lawyer nor any member of his family. He however said that the idea to kidnap Yisa, his sister and her son came from one Olugbenga Kehinde Ojo, a former Driver to the Deputy Comptroller’s uncle. He added that the idea was to kidnap the lawyer and force him to lure out his sister, who is a Deputy Comptroller of Customs.

“To make his story believable, he put a call to the said Ojo. He told him to meet up with him, that he had successfully kidnapped the lawyer. Ojo was happy and so he rushed to the venue, straight into the waiting arms of police detectives investigating the case. Both suspects took the police to a shanty, surrounded by water, situate in Eleko, on Lekki/Epe expressway, Lagos, where they prepared as a hostage ground for their would-be victims.”

Oti added that Odudare and Ojo had planned to kill any of the family members that saw Ojo in the process because they all knew him.

“It was the agreement of both suspects that in order to avoid the mistakes of the notorious kidnapper, Evans, the moment any of their potential victims sights Ojo, a former employee of the Deputy Comptroller’s uncle, that person must be killed because they all know him.

“The Commissioner of Police advised Lagosians to be wary of people who call them out for lucrative business deals as it might turn out to be a ploy to kidnap or harm them. CP Edgal assured that the command will remain proactive in the fight against crimes and criminality in the state,” Oti said. 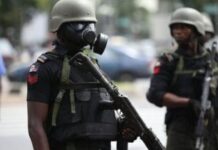