It was gathered that the thugs who were shooting indiscriminately arrived Mrs Abuh’s house around 2.00 p.m. and surrounded the house, blocking every exit and escape route from outside.
They then poured petrol on the building before setting it ablaze, while terrified villagers watched from afar.
After the Independent National Electoral Commission (INEC) announced the candidate of All Progressives Congress (APC) as winner of Kogi governorship election, political thugs allegedly continued on their killing spree.
Kogi State PPRO, DSP William Ayah confirmed the incident in a statement titled: “Culpable homicide/mischief by fire ” and said, “On 18/11/2019 around 1630hrs, one Musa Ety of Ochadamu, Ofu LGA reported at the station that around 1030hrs of same date, there was a misunderstanding between one Awolu Zekeri, aged 35 years, member, of APC and one Gowon Simeon, a member of PDP, both of Ochadamu. In the process, Gowon Simeon stabbed Awolu Zekeri with a knife on his lap, he died on his way to the hospital.
“As a result, angry youths in the area mobilized to the house of one Simeon Abuh of same address who is an uncle to the suspect, set it a blazed, thereby burnt one Salome Abuh, aged 60 years.”
Responding to the evil act, the PDP spokesman for Wada/Aro Campaign Council, Faruk Adejoh-Audu was quoted saying:
“Chanting GYB 4+4, the thugs, shooting sporadically, arrived Hon (Mrs) Abuh’s house at about 2pm this afternoon and surrounded the house, bolting every exit and escape from outside.”
“They then poured petrol on the building and set it ablaze as other terrorized villagers watched from hiding. She reportedly attempted to escape through a window but was prevented by the metal burglary proof and gun shots with bullets raining in her direction.
“The blood thirsty thugs waited, shooting and watching with relish while Mrs Abuh cried from inside the inferno until her voice died out. They reportedly left only when the entire house and Mrs Abuh had been burnt to ashes. There are fears that the killing spree may escalate over the night.
“We are calling on all men of good conscience to immediately help the people of Kogi State appeal to the Inspector General of Police to rein in Bello’s thugs and protect our people whose only crime was that they voted for their choice, a vote that was never allowed to count.
“Unless Nigerians of Good conscience immediately come to our aid innocent people may die worse agonizing deaths as the blood lust of Mr Bello and his supporters continue. “So far there’s no indication that the Kogi State Police will arrest her killers or even prevent further attacks and killings of people.”
sharing is Caring... Please Share

Ekiti 2018: Fayose And His PDP Are Jittery – Oshiomole 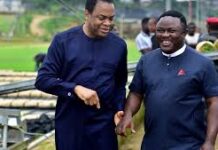