Also five other people were confirmed dead while many others were injured
The incident happend at Ladokun area in Surulere local government area,Oyo state
Koffy D was said to have been retuning to Ogbomoso from Ilorin, Kwara state where he had gone to present a sport programm before the vehile he boarded had an heason collision with another car.
According to an eye witness, four people died on the sport while other died on the way to the hospital
The accidents pour sour taste on the Christmas and boxing celebration as many of his fans and family members were in mourning mood .
sharing is Caring... Please Share 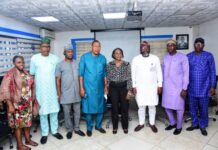