Members also said the claim of signatures being collected for the purpose of achieving the alleged impeachment was imaginary and did not exist.

Speaker of the house, Yakubu Dogara, promised to investigate the impeachment claim by directing the Committee on Ethics/Privileges to look into it.

The twist started when two members accused of being the ringleaders of signature collection, rose to address the House, dismissing the allegation.

One of the members, Mr Nicholas Ossai, told the House that he was in shock on Tuesday when he heard a colleague from Jigawa State, Mr Mohammed Gudaji-Kazaure, saying that signatures were being collected.

Incidentally, Ossai, who is from Delta State, is the Chairman, Committee on Ethics/Privileges.

Ossai stated that before he would contemplate collecting signatures to impeach the President, he would have to first consult his constituents.

He added, “I am surprised that Kazaure would raise such an allegation.

“I am not collecting any signature; why does he want to tarnish my image?

Ossai begged the leave of the House to step aside as the chairman of the committee so that the investigation would be thoroughly conducted without interference by him.

The Chairman, House Committee on Public Accounts, Kingsley Chinda, who was also linked with the reported signature collection, dissociated himself from it.

Chinda said though impeachment was a legislative duty that would be carried out whenever it became necessary, in the extant situation with Buhari, it had not been contemplated.

“I will rather say that we should not bother ourselves with that allegation, even though it is a legislative duty,” he added.

The House also took another decision on the comments of its former Chairman, Committee on Appropriations, Abdulmumin Jibrin.

It summoned Jibrin to appear before the Committee on Ethics/Privileges to clarify his statement that the resolutions passed by a joint session of the National Assembly on Tuesday were influenced by the Peoples Democratic Party.

Recall that the Senate and the House held a closed-door session on Tuesday and came up with a 12-point resolution.

The joint session had called on Buhari to stop the killings by herdsmen in the country, harassment of political opponents and not to be selective in the fight against corruption.

It added that if the President did not comply with the resolutions within a reasonable time, the National Assembly would invoke its constitutional powers against the executive.

Gudaji-Kazaure immediately interpreted the threat of invoking constitutional powers to mean impeachment and vowed not to support it.

He had also alleged that signatures were being collected.

As the session rose, Jibrin too issued a statement saying that only PDP lawmakers spoke at the meeting, while members of the All Progressives Congress kept mute because they did not want to be confrontational.

Jibrin, who claimed that he spoke for ‘The Parliamentary Support Group’, alleged that the executive session dwelt more on matters personal to the President of the Senate, Bukola Saraki, and had nothing to do with the entire National Assembly.

A member from Kogi State, Karimi Sunday, had raised Jibrin’s claim under matter of privilege, urging the House to summon him to face the Committee on Ethics/Privileges.

He noted, “Jibrin went to the media to raise issues that contradicted our discussions at the executive session.

“He spoke on things that were not even mentioned at all. He also lied that only PDP members spoke.

“Mr Speaker, this is a lie and it is very unfortunate the way we are going.”

Reacting to the development, Dogara expressed surprise over Jibrin’s statement.

He said it was more disturbing that a member, who did not attend the executive session, was the one writing about issues that were not discussed by senators and members.

“I will refer Ossai’s issue and the issue raised by Kirimi to the Committee on Ethics/Privileges for investigation,” the Speaker ruled.

Speaking with The PUNCH, Atunwa, who is the Chairman, Committee on Justice, said, “It is absolute nonsense.

“The point is, the word impeachment was never mentioned throughout the period of the executive session.

“No signatures are being collected and nobody is collecting signatures.”

Commenting on the plan by the National Assembly to invoke its constitutional powers against Buhari, the President of the National Council of Tiv Youths, Chief John Akperashi, in an interview with The PUNCH, stated, “His (Buhari) desperation for a second term has obliterated his consciousness for decorum, decency and leadership virtues. His advisers have sufficiently rubbished his integrity.”

Akperashi, however, said that any impeachment move against Buhari would “heighten the tension in the country”

Also, the President of the Middle Belt Youth Council, Emma Zopmal, said, “Harassment of opposition is a dictatorial tendency. This regime has real plans to plunge Nigeria into a one-party state by all means. What’s happening now is characteristic of Nazism, fascism, and of a tyrant communist state.”

But the Centre for Anti-Corruption and Open Leadership and the Committee for the Defence of Human Rights cautioned the National Assembly against harassing the executive arm and standing in the way of the police investigations of Saraki. They noted that criminal investigations must be allowed to follow the due process.

The CACOL Director, Debo Adeniran, said, “The Senate should not be found to be harassing the executive because of investigations involving their members. As long as the name of the Senate President was mentioned in criminal cases, he needed to answer to the police. The National Assembly may want to blackmail the executive into submission.”

Also, the CDHR President, Malachy Ugwummadu, said, “The members of the National Assembly cannot push that a criminal investigation should not be investigated properly because it involves a high member of the legislature. That is an abuse of their powers.”

Meanwhile, supporters of the All Progressives Congress under the aegis of the APC Grassroots Youths for Change have dismissed the impeachment threat against the President. 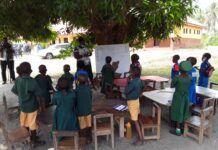 Legislative Oversights Necessary To Put Us On Our Toes- LG Chairmen