This seems to be the end of the road to the ambition of Dr. Kayode Fayemi, the serving Minister for Solid minerals who is aspiring to rule Ekiti State as details of his charge sheet for corruption has just been revealed at Ekiti State High Court.
In the document, Charge Sheet HHD/05C/2018 filed on 20th of January 2018, Dr. Fayemi was charged alongside his erstwhile finance commissioner , Dr. Vincent Kolawole for high crimes of corruption by stealing 300 million Naira proceeds of bond raised to execute projects in the state, conspiracy to steal 681 million Naira plus from bond proceeds meant for Governor’s Office renovation, 716 million stolen as sum from expenditure meant for School of Agriculture, 198 million stolen from sun meant for building Ekiti State Liaison Office in Lagos , Stole 2.25 Bn Naira bond fund  meant to construct modern market in Ado Ekiti that was never built and 468 million being amount stolen from water works project also slated to be built from bond but not existent despite Ekiti continuance to pay for same debt.
In all, Fayemi was accused of stealing well close to 5 billion Naira of the 25bn bond money he raised and looted from the state evident in the massive wealth he acquired despite being a governor as only a pauper lecturer from Ghana after long fought battle by progressive forces whom he quickly abandoned.  In addition, he was accused of contempt of the judiciary as well as obstruction of justice and is looking at between 20-25 years in prison for the offences if convicted. 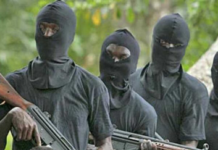