Despite the many allegations and accusations over their activities and the unpleasant ways they treat their victims, the questionable activities of operatives of the Special Anti Robbery Squad, have come to the fore once again.

They shared how operatives of the Special Anti Robbery Squad allegedly arrested them for “indecent dressing,” and demanded a N100,000 bribe from them on Wednesday.

The two ladies said the SARS officers threatened to take them away and that they paid N10,000 to secure their freedom.

Tamaradenyefar alleged that she and Yewande encountered the SARS operatives around Akowonjo-Egbeda area of Lagos on Tuesday night.

“My friend and I went to visit another friend and on our way back, around Akowonjo Egbeda, they (SARS officers) stopped us, asked us to come down from the Uber, searched our bags and found nothing asides money,” Tamaradenyefar alleged.

Continuing, she said, “Next thing he goes ‘Go and meet our Oga.’

“He said because we were dressed indecently and it’s against the law. We tried asking questions and the only thing they ordered us to do was to enter their van.”

From her Twitter handle, @Tamaradenyefar, the lady revealed that the SARS operative asked them to pay the sum of N100,000, and they ended up paying N10,000, before they were allowed to go.

And even after the girls had paid the money, Tamaradenyefar alleged, they were only released after one of the operatives had given Yewande his phone number in the hope that she would be interested in meeting him later. 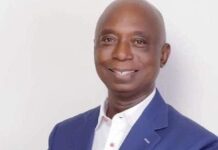