More nominees for commissioners and special advisers in Lagos State have promised to join hands with Governor Babajide Sanwo-Olu to move the state forward.

It will be recalled that the adhoc screening committee of the Lagos State House of Assembly, headed by Hon. Rotimi Abiru began the screening of the Commissioner and Special Adviser nominees of the Governor on Thursday.
The 16-man committee drilled eight of the nominees, including a former Secretary to the State Government, Mr. Tunji Bello on the first day.

The first nominee that appeared before the committee on Friday, Mrs Bolaji Cecilia Dada revealed that she was a member of the Lagos State Sports Council and later served as the Executive Secretary of Apapa Local Government.

Dada stated that she would ensure that the educationally disadvantaged girls go to school, and take area boys off the street if she was made the Commissioner for Women Affairs and Poverty Alleviation.
“We will let them know that there is dignity in labour rather than making them go about doing nothing,” she said, while throwing her weight behind local government autonomy.
Another nominee, Mr. Moyosore Jubril Onigbanjo (SAN) stated that Lagos State needed to get it right so that others could get it right.
Onigbanjo, a former Chairman of Ibile Oil and Gas, revealed that he always talkef about the progress of Lagos State on development and foreign investments in all the interviews he granted on the media.
“Lagos State has been fortunate to have a number of distinguished Attorney Generals including the current Vice President of Nigeria, Professor Yemi Osinbajo.
“I will perform as a lawyer of over 30 years. Cases take time because judges write with pen and paper unlike in developed countries where the judges have adequate recording system that captures everything,” he said.
Onigbanjo stressed that the state needed to stop judges from using long hands to write, and that there were some laws in Lagos State that have not been reviewed since the 60s and we need to check this.
He then promised to reform the judicial system and appeal to the government to improve infrastructure in the courts and decongest the prisons.
The third nominee for the day, Mr. Olalere Odusote, a Mechanical Engineering from the University of Ibadan, said that the issue in the power sector is complex.
Odusote stated that the generation companies could generate powers whereas the distribution companies might not be able to distribute such quantity of power.
He added that the state could only improve power  if it domiciled power.
“We must identify our problems and the cost before we solve them.
“We must do a data analysis and come up with an integrated power plant for the state.
“We can do solar, but the solar density in Lagos is low unlike other parts of the country like in the country,” he said.
The immediate past Commissioner for Wealth Creation and Employment in Lagos State, Mrs. Uzamat Akinbile-Yusuf, revealed that Lagos indigenes were given priority in loan schemes, when she was in office.
“We have child protection law that takes care of our children and we have been sensitising people about it.
“We ensure that those who are abused come out to expose the abuse and the culprits, she said.
Mr. Ganiu Olusegun Dawodu, who was also screened advised that the state’s criminal justice system should be improved upon.
Dawodu, who has worked as a lawyer for 25 years, was commissioner for sports and youth development in the state.
He added that as Commissioner for Youth and Sports, he identified with the youths, got them together, registered and retrained them through skill development centres.
“We also provided grants for them and monitored their activities and we met with them regularly. We also got increased budgetary allocations for the ministry,” he said.
sharing is Caring... Please Share 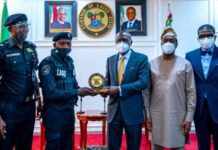