According to confirmed reports, the thugs who invaded the Nigerian Senate days agi and stole its mace have been identified. The five suspects have been arrested by the FCT police command after they brazenly broke into the chambers of the National assembly and forcefully escaped with the Mace, the symbol of authority of the nation’s legislature.

The criminals were ALLEGEDLY led into the Red Chambers by Senator Ovie Omo-Agege, are all from Delta State.

Winner of the 2017 NLNG Prize for Literature, Ikeogu Oke Dies... 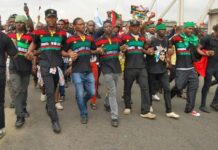