He said the figure was arrived at after deduction of N4.950.80 trillion received as payments from the N5.121.40 trillion approved subsidy claims of the Corporation from January 2006 to December 2015.

This is coming at a time President of the Senate, Bukola Saraki, has declared that NNPC stinks, vowing that those behind fraud in the corporation will be exposed

Some Female Teachers In Ghana Also Demand Sex For Grades –... 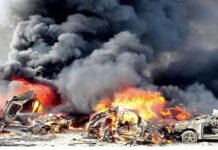