Three persons were feared killed in the Apongbon area of Lagos State on Friday as a member of the National Union of Road Transport Workers, identified simply as Yellow, was said to have led men of the Special Anti-Robbery Squad and some suspected cultists to arrest some young men in the area.

PUNCH Metro gathered that the young men, whom Yellow had wanted to arrest, were witnesses to an attack that the NURTW member allegedly initiated against his opponents in the area a few weeks ago, which led to the death of one person.
Annoyed by Yellow’s atrocity in the community, the young men were said to have trailed, apprehended, assaulted and warned him to stop creating tension in the area.
In a bid to retaliate, Yellow reportedly led the SARS operatives and some cultists to arrest the young men on Friday.
A resident of the area, who identified himself simply as Bayo, said 10 of the men ran for their lives when they saw Yellow leading the policemen and cultists to arrest them, adding that some of them jumped into the lagoon.
He stated that some of the men, who hid by the edge of the lagoon, were stabbed with knives and shot at as they fell into the water, adding that while six of them were rescued alive, the corpses of three of the victims were recovered with bullet holes.
Bayo said, “An NURTW member, Yellow, was the one who mobilised men of the SARS and some cultists to the waterside in Apongbon to arrest some people in the community. A few weeks ago, Yellow, who is from the area, led some hoodlums to attack his NURTW opponents in the area and in the process, someone was killed. Some of the men he wanted to arrest were witnesses to the attack and had been trailing him since then.
“When the men saw Yellow recently, they apprehended and assaulted him, but other members of the community cautioned them and he was released. The men were annoyed that he was an indigene of the community and was given non-indigenes information about the area to create problems in the community.
“After that day, he relocated his family to another place, and on Friday around 9.30pm, he led the SARS men and cultists to arrest those men by the waterside. The SARS operatives were from the Gbagada Police Division and they were in uniform. So, immediately the boys saw them, 10 of them ran towards the lagoon to escape.
“Two jumped into the water, but eight held on to the ledge and the cultists, who pursued them, stabbed their hands and shot at them as they fell into the water. Six of the men were rescued alive, but three died, while one of them is still missing. There were bullet holes on the bodies of the dead men when their remains were recovered.”
Images of the victims had been trending online as PUNCH Metro learnt that some other men involved in the assault on Yellow, who were not lucky to escape during the invasion, had been arrested.
However, mixed reactions have been trailing the events that led to the men’s death, while Nigerians, condemned the SARS operatives for their alleged involvement in the death of the victims, some others blamed the victims for jumping into the lagoon to evade arrest.
@Ayomidejishaw urged Governor Babajide Sanwo-Olu and the police to investigate the incident to get justice for the deceased.
He wrote, “Men of the FSARS came to the seaside of Apongbon last night in the guise of raiding and ended up pursuing 10 boys into the lagoon. Six were pulled out alive in the morning, but three bodies were recovered after an extensive search and one is still missing. Please help investigate this issue.”
Another social media user, @FRESH_IGBO­­­­_BOY, blamed the boys for running and jumping into the lagoon to escape arrest.
He said, “But why run? In fact, why run into the lagoon? Isn’t it better to get arrested for whatever crimes than committing suicide?”
The state Police Public Relations Officer, Bala Elkana, said there was no SARS operation in Apongbon, adding that the SARS operatives were at the state headquarters and not in Gbagada.
“From the brief I got, no SARS operation took place there; we have been hearing that they recovered bodies, but there is no SARS at the Gbagada Division; we have SARS at the state command headquarters in Ikeja,” Elkana stated.
sharing is Caring... Please Share

Zenith Bank Celebrated As A Satisfied Customer Eulogize Them For Reversing... 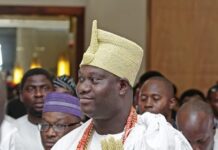