Jagaban as he’s fondly called is celebrating his 66th birthday, there are some facts people especially his admirers would like to know about him.

His name is often prefixed with Asiwaju and suffixed with Jagaban.

He holds the traditional titles of the Asiwaju of Lagos and the Jagaban of the Borgu Kingdom in Niger State.

Either you love Tinubu or you despise his brand of politics, here are ten things that should be said about this astute and shrewd politician:

1. He was elected a Senator representing the Lagos West senatorial district in the short-lived Nigerian Third Republic in 1993 under the umbrella of Social Democratic Party (SDP).

2. Tinubu is a founding member of the pro-democracy group, National Democratic Coalition (NADECO), which mobilized support for the restoration of democracy and recognition of the 12 June 1993 results.

3. He went into exile in 1994 and returned to the country in 1998 after the death of military dictator, Sani Abacha, which ushered in a transition to civilian rule.

4. He was elected the governor of Lagos State, under the umbrella of Alliance For Democracy (AD) from 29 May 1999 to 29 May 2007. Tinubu was the only AD governor among the five that was re-elected in the 2003 election.

5. As a Governor, he worked with three deputy governors; Burcknor Akerele Femi Pedro and Abiodun Ogunleye. No other governor had that opportunity.

6. Before his foray into politics, Tinubu worked for American companies: Arthur Andersen, Deloitte, Haskins & Sells, and GTE Services Corporation. After returning to Nigeria in 1983, Bola Tinubu joined Mobil Oil Nigeria, and later became an Executive of the company.

7.  He has successfully built a political empire around himself. Prof Yemi Osinbajo, was Tinubu’s Attorney General and Commissioner for Justice. He is today, Nigeria’s Vice President. Rauf Aregbesola was Tinubu’s Commissioner for Works; he is serving his second tenure as Governor of Osun State. Babatunde Raji Fashola was Tinubu’s Chief of Staff and successor in office. He is today Nigeria’s Minister of Power, Works and Housing. Lai Mohammed was Tinubu’s first Chief of Staff; he has become Nigeria’s Minister of Information. Senators, members of House of Representatives, and many other appointees have become his political sons.

8. Tinubu, fondly called the Lion of Bourdillon by admirers, created additional 37 local councils to bring the number of developmental areas in the state to 57. When the allocations to the councils were seized by the Federal Government, his team of experts invented creative financial engineering that made the councils to survive.

9. Tinubu is the first leading Yoruba politician, whose party while in the opposition defeated a ruling party in a presidential election, thereby controlling the central government.

10. Tinubu’s love for music is legendary. For decades, Tinubu has hosted local and international superstars including: Akon, Davido, KWAM 1 and many others.

NOUS INTL. USA, Calls For Referendum Over Status Of Ogoni In...

We Only Found Mum’s Ashes, Skull – Daughter Of Burnt Kogi... 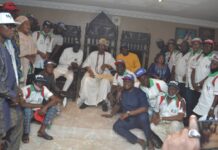