Operation Amotekun is a new security development formed by Southwest Governors for regional Protection of the people of Southwestern Region.
This development has brought a lot of controversies all across the country as some people believed it wasn’t the right step because Nigeria already has the Police Force.
Just two weeks ago, the Northern Coalition called Miyetti Allah threatened the Southwestern Region of the 2023 Presidential Slot if Amotekun becomes a reality.
Nigerians have been waiting for Tinubu to make a statement on Amotekun to know whether he is for it or against it.
Many believed because of his supposed plan to go for Presidency in 2023 , he’s trying to play safe.
The APC National leader finally broke silence on Amotekun and urge the Governors to meet with the Federal Government in order to make the plan work.
They all met today with the Vice President, Yemi Osinbajo and it was finally agreed that Amotekun is here to stay.
Nigerian have reacted on Social Media and many are praising Bola Ahmed Tinubu for a Job well done in the matter.
sharing is Caring... Please Share 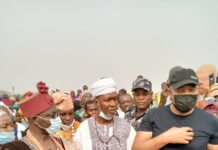