The Senatorial candidate of the Peoples Democratic Party (PDP) in Akwa Ibom North West Senatorial District, Engr Chris Ekpenyong on Monday opened his defence at the National Assembly Elections Petition Tribunal sitting in Uyo by calling a witness who accepted he was a fake agent during the elections.

Mr Kufre Augustine from Abia Okpo Ikot Nkap in Obot Akara Local Government Area, claimed to have been the Local Government Collation Agent for Zenith Labour Party (ZLP) but under cross examination by S. I. Ameh, SAN Counsel to Senator Godswill Akpabio, the Witness agreed that his party did not have a candidate in the election.

The Witness agreed that the acronyms of all the Political parties were usually stated on the result sheets but when Mr Ameh showed him the Obot Akara Local Government result which he claimed he was an Agent, his party was not listed.

Also led in evidence by Mr Ameh, Witness accepted to have lied on oath when he agreed that he is a teaching staff of Akwa Ibom State College of Technology contrary to his deposition on oath that he is a businessman.

Earlier there was mild drama in the Tribunal when another Witness called by Engr Ekpenyong, Mr Sylvester Inyang of Ikot Ukana in Obot Akara Local Government Area suddenly claimed he had developed eye problems and could not read the documents presented to him which were admitted as exhibits in the Tribunal.

The document which is an INEC certified true copy of the election result in Obot Akara Local Government Area showed that the total number of votes cast exceeded the number of accredited voters.

But when asked to read the figures from the exhibit document, the Witness claimed he could not see from the same document he had earlier answered questions from the PDP Lawyer. “My Lord I have eye problems, I cannot see again,” he said amidst laughter in the Tribunal.

It was the contention of Mr Ameh that since the INEC document tendered by the PDP showed that the number of votes in the Local Government Area of the PDP candidate, exceeded the number of accredited voters, the result ought to have been cancelled but the Witness claimed he could neither see the figures not what was written on the document.

The matter was adjourned to Tuesday for the Respondent to present more witnesses. 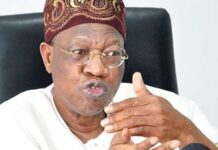