over the counter wholesale can keflex treat chlamydia vinegar and yeast infections how much is levitra at walmart
28 C
Lagos
Monday, May 17, 2021

In early 1983, I made it possible for Nuri and Bah to get the Nigerian Defence Academy admission forms. It wasn’t difficult at the time. To fill the forms, however, became a problem.  They were not interested in a military career. They wanted to go to the University of Maiduguri. I made them to keep the forms and think over it. They did, reluctantly. 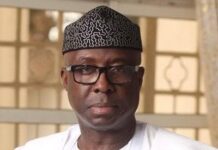