is cipro a good antibiotic for strep throat what clears up a yeast infection symbicort free samples what countries sell antibiotics over the counter abilify price with insurance what antibiotic cures gonorrhea and chlamydia
27.2 C
Lagos
Saturday, July 31, 2021

President Muhammadu Buhari has challenged members of the National Youth Service Corps (NYSC), to live up to the expectation of the founding fathers by utilising their education and privilege of visiting different parts of the country to unite Nigerians.

The President gave the challenge when he received the youth corps members at his country home in Daura, Katsina State, on Sunday, during the Eid-el Kabir celebration.
Malam Garba Shehu, the President’s spokesman, quoted President Buhari in a statement in Abuja as saying that ”the primary focus of the NYSC is to expose graduates to the beauty and diversity of the country, so that they can return to their states to share their experiences”.
He urged them to always emphasise the common values of peaceful co-existence, kindness and hospitality that cut across all cultures and religion in Nigeria.
The president maintained that the entire nation depended on past and serving youth corps members to form bridges across all divides in the country.
According to him, this is so because of their first-hand experience of living with different ethnic groups in various parts of the country, studying their cultures and traditions, and enjoying hospitality, which underpins every community in Nigeria.
“From Lagos, Port Harcourt and other parts of the country, you are at the end of the country. This posting will make you know this place, Daura, and you can disabuse the minds of those who are not educated about the other side of the country.
“It is only the NYSC that is merging us together and, of course, the police and soldiers,” he said.
The President noted that in every meeting with former Head of State, retired Gen. Yakubu Gowon, who initiated the programme in 1973 to promote unity and understanding among Nigerians, he always remembered to appreciate the ingenuity of the programme and need for continuity.
In his remarks, President Conde of Guinea, who celebrated the Muslim festival with Buhari, said that the diversity of Nigeria remains its greatest strength, urging the youth corps members to always see themselves first as Nigerians, before identifying with their ethnic background.
“First, you are Nigerians before you are from any other part of the country. So promote the unity of the country regardless of your tribes,” he added.
The Chief Liaison Officer of NYSC in Daura, Aliyu Abdullahi, said it was a privilege to serve in the hometown of the President, and also meet with him and his Eid-el Kabir special guest, President Conde.
While urging the President to intensify the fight against corruption, Abdullahi commended him for the efforts to restore peace, security and unity in the country.
He assured the president of the prayers and support of the corps members.
President Buhari later donated two cows and 10 bags of rice to the corps members, in addition to some cash, with his Guinean guest complementing him with two cows.
sharing is Caring... Please Share 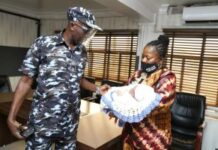