The Transport Committee set-up by Governor Dapo Abiodun of Ogun State to oversee the affairs of the six transport unions in the state appears to be creating a scenario that could lead to violent crisis in the National Union of Road Transport Workers (NURTW) with his alleged interference in the affairs of the union.

It will be recalled that Governor Dapo Abiodun sacked the executives of the six transport unions in the state in June, 2019 and appointed a 13 man Committee, headed by Barrister Sunday Olufemi Adeniyi, to oversee the affairs of all the unions.

It was gathered that the committee then appointed caretaker committees in all the local governments in the state to take charge of the affairs of the unions and sell government and union tickets to members.

The unions were divided into two and each group operates on a weekly basis with NURTW, TWORA and ACCOMORAN operating the first shift, while the others take over the second shift a week after.

However, sources revealed that a letter from the immediate past National President of the NURTW, Alhaji Najeem Yasin in July 2019 directed that Alhaji Akeem Bodunrin aka Iyeru should take over as the Acting Chairman of the NURTW in Ogun State forthwith.

Yasin reportedly states in the letter that Iyeru would be in office as Acting Chairman of the union until October 23, 2019 when the election of the union in the state would hold.

With this, Iyeru, who had been suspended by former governor Ibikunle Amosun as the Branch Chairman of the NURTW in Ita-Oshin area of the state due to his alleged romance with a perceived political enemy of Amosun, Senator Adeola Olamilekan aka Yayi, got back into limelight and reckoning in the state.

It should be noted that the Dapo Abiodun-led transport committee generates revenue for the state government by selling government tickets and union tickets to the transporters in the state.

Watchers of events however, believe that Governor Dapo Abiodun went beyond his bounds by meddling in the affairs of transport unions in the state, especially NURTW, which is a strong affiliate of the Nigeria Labour Congress (NLC).

They insisted that NURTW ought to operate like other affiliates of the NLC such as Nigerian Union of Teachers (NUT), Nigeria Medical Association (NMA), Nigeria Union of Journalists (NUJ) among others that are independent of government.

They faulted the creation of a Transport Committee to head the transport unions in the state in the first instance, saying that the unions were not government parastatals.

It was added that Ogun State was the only place, where this was happening and that such never happened, even during the military regime in the country.

The alleged latest onslaught against the NURTW in Ogun State is the reported appointment of Iyeru by the Transport Committee as the sole agent for the sale of government tickets in Ogun State beginning from Monday October 7, 2019, while the sale of NURTW tickets was outrightly banned in the state.

It was gathered that this strange directive was contained in a letter issued by Barrister Sunday Adeniyi-led Transport Committee to the national body of the NURTW headed by Alhaji Tajudeen Baruwa last week.

Baruwa was said to have seen this as a slap on the union, especially as he is from of Ogun State, where he had served as the Chairman of the Union and a sinister plot by some elements close to Governor Abiodun to promote their selfish agenda and hijack the union from its authentic leadership in the state.

It was gathered that while the NURTW was said to have been directed not to sell its union tickets starting from Monday 7th October, 2019 all other transport unions are having a field day selling union tickets to their members, thus raising curiosity on why the NURTW was being treated in such manner.

However, the NURTW President had reportedly swung into action by mobilising his men to start selling NURTW tickets all over Ogun State to members from Monday October 7 to coincide with the take off of sale of government tickets by Iyeru and his men, which might likely cause breach of peace across the state.

We however, gathered that tension is already building up in major parts of the state and it was revealed that men of the police force had been placed on an alert in the event of breakdown of law and order.

Inside Details Of How US Government Indicted 77 Nigerians For Money... 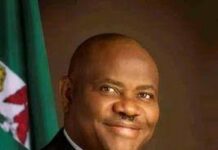