In what can described as defiance to court order, dethroned Eleruwa of Eruwa, Mr. Samuel Adegbola, is yet to vacate the place 17 days after the Supreme Court pronounced him unfit for the position.

It would be recalled that Adegbola was last Friday sacked from the throne after over 21 years as king. An Oyo State High Court had on January 26, 2011 removed him. But not satisfied, he appealed the judgement.
The sacked monarch was installed the Eleruwa in 1998 by the Oyo State Government amidst protracted protests by members of the rightful ruling house after the last Eleruwa, the late Oba Bolanle Olaniyan, who is from the Akalako ruling house, passed on, on May 1, 1994.
Although his nomination and selection by the kingmakers were challenged by the Laribikusi house, which argued that he was not a member of the ruling arm, but belonged to Akalako where the previous king emerged, the state government went ahead to inaugurate him, prompting the present action.
Those who challenged the authenticity of Adegbola’s claims to the throne are Mr. James Olatunde Idowu and Alhaji Ajao. Joined in the suit besides Adegbola are: the Governor of Oyo State, the Attorney General, Ibarapa Local Government, Chief Jacob Adewusi, Chief Femi Atanda, Chief Idowu Okeowo, Chief E. Ojebisi and Mr. Kasali I.
The plaintiffs, represented by the lawyer, Alhaji Lasun Sanusi (SAN) at the high court sought eight reliefs in their statement of claims which were all granted by the court. Having summarized all the submissions of the counsel to both sides, Justice Abimbola resolved all the issues in favour of the plaintiffs.
A week after the Supreme court judgement, findings by this reporter showed that Adegbola is yet to vacate the palace. Though the main gate has not been opened since last Friday morning when the dethroned monarch left town for an ‘unknown place’, sources said his two wives are still in the palace.
“The small gate overthere is open is open for people to walk in. The main gate is shut for now. The deposed monarch left town in the early hours of last Friday, thinking he was going to win. He had planned to return and be welcome by a jubilant crowd. But the reverse was the case. He is yet to return as he is said to be hiding in Ibadan, the Oyo State capital,” the source added.
The police, said the source, had assured that they would effect the sack immediately they lay their hands on the judgement, advising stakeholders to be calm.
sharing is Caring... Please Share 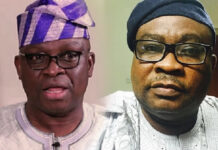