The Coalition for Revolution (CORE), organisers of the RevolutionNow have organised a programme which seeks to address the ills of the government, with Femi Falana and Wole Soyinka set to participate.

The programme which has the theme, “Democracy, State Repression and The State of Insecurity in Nigeria”, is slated for August 19, 2019, in Lagos.
The programme which seeks to also address the issue of the detention of Omoyele Sowore, the convener of the RevolutionNow movement has prominent Nigerians such as Nobel Laureate Prof. Wole Soyinka, and foremost Human Rights activist Femi Falana as participants.
A short statement which followed the announcement of the program says:
“In view of the stepping-up of government repression within the past days consequence to the peaceful #REVOLUTIONNOW protest. The Coalition for Revolution, CORE, is organising a working consultative assembly of activists and organisations against the Draconian development and the detention of scores of activists in the DSS cells.
“This is in continuation of our popular struggle. Consultation and mass education are necessary in the struggle for change.”
sharing is Caring... Please Share

Access Bank Denies Arrest Of Its GMD By EFCC 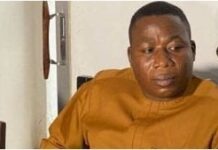