A firm, Timekeepers Store at the Novare Mall in Sangotedo, said the goods looted and destroyed in the store on Tuesday worth over N200 million.

A call to the company, picked by a woman who pleaded anonymous said the hoodlums burgled their way into the store after locking it and went away with wrist watches and sun glasses.
She said: “When we noticed the crisis, we locked our outlet and all our staffs left. We were not there but they burgled their way in and looted our stuffs. We deal with several brands of wrist watches and sun glasses worth millions of naira that was damaged or stolen.
“I’m sure it’s over 200 million.  Government should do something urgently about this. Is there a way all lost can be returned? Government should act fast, because in the light of what had happened, we are not helping ourselves.”
She said the company is owned by a Nigerian who is a Yoruba man.
“I don’t know why we should attack ourselves, damage things we own, injure our own people and say we are retaliating the killings of Nigerians in South Africa.
“‘Our youths are not learned enough and they need to be reoriented because all the damages done makes no sense. They have only caused more damage; they have not resolved any problem. They have rendered so many people jobless,” she said.
Properties worth over N5 million was destroyed by irate youths on Wednesday when they launched an attack on MTN office along Ikot Ekpene road in Uyo, Akwa Ibom State.
MTN Sales representative in Uyo, Idongesit Nkereuwem, said properties destroyed in the attack include computers, staff phones, customers’ phones, windows, glasses and money among others.
“The irate youths ordered people out of the office while they destroyed computers, stole money and customers phones but nobody was injured during the incident.
“They ordered staff and customers out of the office and we ran away through the back doors for safety,” he said.
Nkereuwem said the youths came with cutlasses, axes, sticks and other weapons to vandalise the offices across the state.
Police Public Relations Officers, Odiko Mac-Don, a Superintendent (SP) said the Commissioner of Police had ordered a beef up of security in Uyo.
There was panic at Adeniran Ogunsanya and Bode Thomas in Surulere area of Lagos as police officers prevented hoodlums, over 30 in number from setting ablaze the Shoprite mall at the axis.
The hoodlums burnt some tyres and littered the area with broken bottles and sticks.
They confronted the police, asking the officers to allow them access to the mall.
The policemen became infuriated as the hoodlums became more aggressive; they shot teargas to scare the boys.
In the process, four persons were arrested.
Shoprite in Surulere was shut as well as many offices close to it – First Bank, Polaris Bank, Eco Bank, LG, Samsung and Steps Exclusive among others.
The two MTN offices on Bode Thomas were damaged; PEP on the same road was also damaged. Virtually all their goods including clothes, shoes, tables, chairs, laptops and desktops were looted.
One of the hoodlums, Samuel Effiong said they were fighting for their rights as citizens.
“We learnt that our fellow Nigerians are dying in the hands of the South , so we want to retaliate and destroy all of their properties here in Surulere. We have destroyed Shoprite, two of the MTN offices and PEP. The police refuse to let us enter, we gave them 10 minutes, if they don’t allow us enter, we will forcefully go in and finish what we started yesterday (Tuesday). We came with petrol and matches, stick, bottles, in the middle of the incident the police shot one of us in the chest.
“We are ready to destroy everything here right now and we do not care about the restrictions from the policemen”.
KFC workers inside Shoprite said they were loading the chicken to other KFC outlets to prevent them from getting spoilt.
“Since activities have been shut down in this Shoprite branch of KFC, we have to move out basically our chicken to prevent them from getting spoilt,” he said.
sharing is Caring... Please Share 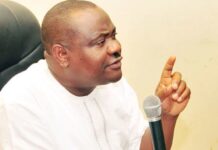 Herdsmen Attacks: Nigeria Will Be Buried If Ortom Is Assassinated, Wike... 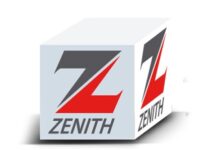